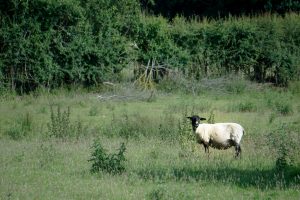 Pluckley is a traditional Wealden village, set in beautiful countryside of orchards and sheep grazing. It is a long-established community with activity dating from Roman times and mention in the Domesday Book as Pluchelei.

St Nicholas Church from The Lane

The village is blessed with many old properties. The parish church of St.Nicholas is Grade 1 listed and has its origins in Anglo-Saxon times. There are more than sixty further listed properties in the parish. 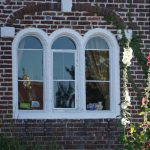 Dering Window at The Black Horse

As with many villages in Kent, residents of Pluckley took part in the peasant uprisings in the Middle Ages. In the fifteenth century, the parish became the property of the Dering family and it was a Dering, in Victorian times, who introduced the distinctive rounded windows which remain a feature of many of the properties.

In 1842, the railway was built and Pluckley station is one of the last remaining station buildings from that era. During the Great War, Pluckley became a Remount Centre, playing a key role in moving horses to and from the Front.

In recent years, Pluckley was the setting for the TV series “The Darling Buds of May”. Author H.E.Bates lived nearby and his stories of the Larkin family enjoying an idyllic rural lifestyle remain ever popular. Visit Kent has launched a Darling Buds tour centred on Pluckley. This, together with Pluckley’s reputation as the most haunted village in England, attracts many visitors who come to enjoy the countryside and its walks. There are several footpaths in and around the parish, the most celebrated of which is the long-distance Greensand Way. Walkers should note that much of the parish is without pavements/footpaths and hi-vis clothing may be advisable. Similarly, the lack of street lighting suggests that you bring a torch during hours of darkness.

The station is situated a mile or so south of the village, while visitors arriving by car will find a free car park on the QEII Recreation Ground in the village centre.

Serving the needs of residents and visitors alike, are three shops, three pubs, two hotels, a number of B&Bs, two Certified Location caravan site and a ‘glamping’ site. Details of these are available on the links.