Pluckley is fortunate enough to have a dedicated tennis court (hardcourt) as well as a MUGA (Multi Use Games Area) court on the recreation ground by the Pavilion. The main court was kindly refurbished in 2019, courtesy of the Parish Council. The Tennis Club operates the main tennis court and it can be booked online by the hour. Booking is free for members and just £7.50 per hour for non members. To book the court click here.

Members benefit from free club days. Sessions are run by one of the committee on Saturdays 1000-1200 all year round and during the months of British Summer Time, on Wednesdays, 1700-2000. These sessions are a great way to practice singles and doubles with a friendly group of people across the two courts. All you need to do is bring a racket as balls are provided. During the sessions, the Pavilion is open for use of its facilities. If you are thinking of becoming a member then coming to one of these sessions is a great way to find out more.

The Tennis Club is a member of the LTA (Lawn Tennis Association) and Kent Tennis and members get exclusive access to purchase Wimbledon tickets as well as a range of other benefits. Annual membership is just £40 for adults and £10 for Children. Click here to apply. 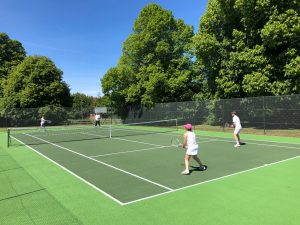 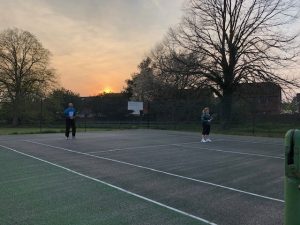 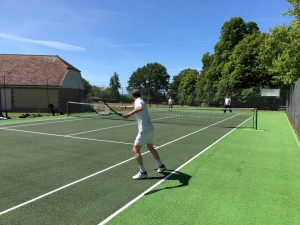 If you wish to enquire about membership, have any questions for the club or just want to get involved, then please visit our website at pluckleytennis.net or email us at [email protected]. You can also follow us on twitter or facebook.

The History of Tennis in Pluckley

Tennis was originally played in 1943/44 at Barhatch on Forge Hill (now demolished for new housing) then at Homewood’s on a grass court. In 1966, a hard court was built on the recreation ground. In the late 1970s, the club became known as the Surrenden Tennis Club. A second court (the MUGA) was built in 1980 with funds raised within the village and grants. The Surrenden Tennis Club was officially wound down in 2012

The current Pluckley Tennis club was formed in 2016. Following an introductory meeting in July 2016, the first AGM of the new club was held in September and an open day to fully launch the club was held in April 2017. Since then, the club has continued to grow and maintain its membership.

The Tennis Club are very grateful to both to Parish Council for their continued support and the Cricket Club who share the Pavilion with us.